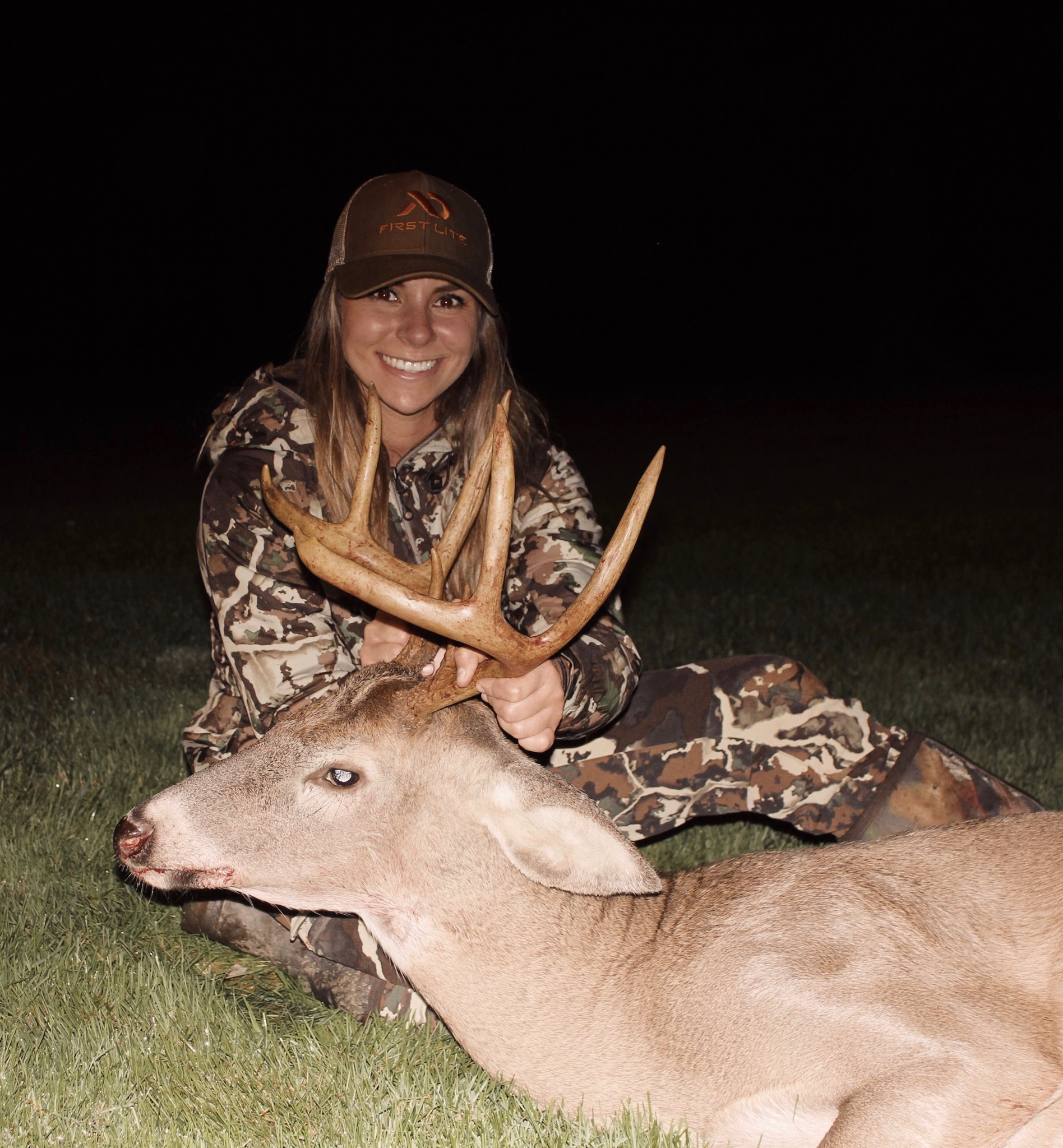 If you are a whitetail hunter, you know that there are a list of strategies that are religiously followed in an effort to harvest this species. Some of these strategies include factors such as temperature, time of year, wind direction, scent control, bedding areas, food sources, hunting pressure, and age of animal. The list goes on and on. While we hear stories and have experienced for ourselves these factors working (or failing) for us at one time or another, we have learned that not much be denoted as “set in stone” – and for this, chasing whitetail can become one of the most addicting pursuits on the planet.

In preparation for my 2018 archery season, I had somewhat of a different perspective in my approach after collecting a plethora of information from a variety of resources. I felt that I was more well-versed in understanding wind and scent control, but most of all, I felt more confident in understanding the mannerisms of mature whitetail.

Mature whitetail deer are somewhat of a different beast. Hunting a 2 ½ year old whitetail buck is much different than hunting a 4 ½ year old. As each year passes, whitetails gain such a significant amount of additional knowledge which adds layers upon layers of difficulty for hunters. After all, there is a reason that mature whitetails can be referred to as survivors – year after year,  they exercise tricks of the trade in order to avoid all predators, including mankind, allowing them to live on.

I had hunted opening day of the 2018 season with no success. As I climbed down out of my treestand at dark, I decided that it would be a good idea to check the trail camera that was close to my stand to see what had been in the area since the last time that I had checked. Scrolling through the photos, nothing was looking very promising. I began to summon a game plan for where to hunt for my next sit. Just then, a photo came over my screen – a gorgeous, mature 8-point from six days before. As I looked closer, I recalled that he had showed up on one occasion before this while still in velvet in a different area altogether in the summertime, but had been MIA ever since. He only showed himself passing through on two photos, and then he was gone. My heart immediately filled with excitement – the chase was on.

I studied these two photos of him for some time that night. Though provided with minimal information from them, I took what I could get. I was able to gather which general direction he must have come from, the route I needed to take to enter/exit the treestand, and what wind direction I needed to ensure my scent would be nowhere near his nostrils. Using whitetail logic, I knew that this spot was as good as any to hunt him, as it was early season and it was a pinch-point between a food source and bedding area. I also took into consideration that this spot had several white oak trees, which I had learned  was an excellent early season food source. The next opportunity that I had to hunt him would be in two days.

Two days passed, and mother nature brought less than ideal weather conditions. It was October 1st, and the high was 83 degrees. This was concerning not only for deer movement, but for scent control. I needed a west wind for this spot, and to my dismay, saw that it was to be more from the  northwest direction. Although not ideal, I concluded that the conditions were not poor enough to require a change of plans, so I took scent control precautions to the best of my ability and set out for my evening hunt.

Panic began to set in within the first 30 minutes of my sit. The sun relentlessly beat down on me and I could feel bead after bead of sweat running down my forehead and into my eyes. Tiny mosquitoes began landing on my face, but I could only make minimal movements to shoo them away. Despite my scent control, I knew that some scent from my sweat had to be escaping. Had I may a poor judgement call to have hunted here today? Was he getting a whiff of me at this very moment? Had I allowed excitement to cloud my judgement and ruin my opportunity at this deer? I did not have the answers to any of these questions. I knew that all I could do at this point was focus on the factors that I could control, and hope for the best on the ones that I couldn’t.

Some time passed – it was becoming a mental game. What was I thinking? No deer, let alone a mature deer, is going to be out traveling in this heat. Just then, I heard a stick crack behind me. I slowly turned and saw a doe feeding on acorns in a patch of woods approximately 60 yards below me. She was oblivious to my existence. I watched as she peacefully fed across the bottom of the hillside. I then felt a small gust of wind and quickly analyzed its direction – it was out of the west. A small smirk came over my face. The wind had shifted and I finally felt a glimmer of hope. Thanks to that doe, I was provided with reassurance that wind direction was finally in my favor.

The evening progressed with little action, and the sun began to set. For the first time, I felt a break in the heat. It was much more bearable and I allowed myself to relax a bit as I slowly dabbed the sweat from my face with my facemask. I checked the time – 6:30 pm. I decided to stand. For some reason, I suddenly got the notion that I needed to be ready. Darkness was approaching, a time that we like to refer to as “prime time”.

I scanned the woods slowly. There was silence all around. From the corner of my eye, I thought that I caught a glimpse of movement. I slowly turned – and there he was. I could see him standing in a thicket about 50 yards to my right. He was looking away from me and I could see his side profile – it was absolutely breathtaking. His rack embodied a stark resemblance to a ribcage, as his tines curved upwards with equal distance. It was as if the sunlight was highlighting his every feature to me at this moment. I observed with sheer admiration. This was really happening.

He then lowered his head and I lost sight of him in the thicket. I reached for my bow and locked on to my loop. I could feel the sweat on my hand as I wrapped my fingers around my release. He then appeared again, now below me. If he continued to move as he was, I would only have one window of opportunity to take a shot.

To my surprise, he then made a sharp right turn and began to feed up a slight incline leading straight to me. I turned, slowly raised my bow, and waited. In all of the many hunts that I had had in this treestand, never had a deer taken the route that he was. Seconds felt like minutes, I could feel my breathing become heavy, my heart racing. He was incredible.

He was now about 25 yards from me, and continued to move closer and closer. I was unable to take a shot because of the thickness of the low-hanging  trees around me. I had to wait. I glanced ahead to where I presumed he would end up, and decided that if and when he entered the opening, I would have to take my shot there.

He then took four more steps, only a short distance now from the opening that I had designated for a shot. I drew my bow and held as still as possible, feeling my back muscles engage. One step… two step. There he stood in the opening as I rested my kisser on my lip and released a slow breath. I placed my pin behind his shoulder and slowly squeezed. I watched as my arrow flew exactly to where I had hoped it would. He then turned and headed back in the direction that he came and I watched as he fell to the ground and expired. Tears immediately began running down my face. I gathered my things and slowly crawled down out of my tree, in total disbelief at what had just taken place.

Why he came in that evening, I still do not exactly know. Although some things about the hunt were logical, others most certainly were not. My hunt that evening was embarked upon out of a passion for the chase and a little bit of faith fueled by unexplained intuition. I had no idea that he would come by that evening, in fact, I was assuming the exact opposite. But whitetail hunting teaches us, like many other things, that sometimes what seems most logical – fails.

Although common strategies for whitetail hunting should be followed, sometimes the best time to be out in the woods is when you can be. It is easy to get wrapped up in wanting to wait for the perfect conditions, the perfect spot, or the perfect day, but the pursuit of a whitetail also includes risk, tricky judgement calls, and if you’re lucky, the sweetest reward.