Failure is a Prerequisite for Success

It’s no secret that both social media and larger mainstream media sources play major roles in influencing behavior. That’s how so many people have made careers out of being “influencers” after all. Well what comes along with this influence are some negative consequences. Some of these are obvious and noticeable, while many slip past the radar right to our subconscious. A prime example of one of these subconscious effects is what I will refer to as success bias.

You know the feeling when you get back home after a long, tough, unsuccessful hunt. You throw your gear in the corner, get a shower, eat a home cooked meal for the first time in days, and open up your phone to see post after post of giant antlers. Have you ever felt more inadequate?

You might feel inferior, jealous, unlucky – or on rare occasions, genuinely happy for that individual. Why couldn’t it have been you? Don’t act like you don’t know what I’m talking about. It’s worse in those who are extremely competitive and more mild in those with agreeable personalities. On rare occasions, you see a picture from someone with a giant buck or bull and you know that individual EARNED IT the hard way. You feel sincerely proud and happy for them – but this isn’t the majority of cases.

Success bias is the logical error of concentrating on the people or things that made it past some selection process and overlooking those that did not. In the hunting social media world, this means grip and grins, ducks stacked up on the side of a blind, a brown trout on the bank next to a tape measure and fly rod…Anything and everything that yells I’M A SUCCESS.

When all you see is success on social media, it can make you feel like a failure. It can elicit negative thoughts which can elicit negative actions. Trying to hold oneself to the social media standard is a bottomless pit that will manifest itself in the form of a negative feedback loop that causes more self-induced pressure, more urgency, more stress, and oftentimes less fun. Everybody needs that picture to “post” so everyone knows how good of a hunter you are. Be watchful of this effect and tread cautiously.

The truth is we are all failures to some extent and I think it could do many people some good to also see that in others. Authenticity can be hard to find on social media these days. How many people talk about their failures? How many instagram stories do you watch that show a miss, or a bad hit, or an unsuccessful game-less hunt, or maybe even an epic fail? Not many. That is one of the things I enjoy the most about watching the Meateater Episodes. They show it all: the good, the bad, the unsuccessful hunts, the goof ups… They own it.

All of that just to explain the purpose of this blog post: everybody fails and there’s no shame in it. Embrace it because a little authenticity can go a long way.

The purpose of this blog series is to showcase some of the “failures” that even the best in the business experience from time to time. Next level hunters like Ryan Lampers, Brian Call, Brian Barney, Remi Warren, and some of the others featured at the Western Hunting Summit might not fail very often anymore. But I guarantee you, none of them are shy about the many many unsuccessful hunts that they’ve had that have shaped them into the hunters they are. They will likely even claim that they were essential parts of the learning process.

Although I do not fall anywhere close to the category of hunter I just described, I’ll gladly showcase one a few of my own personal shortcomings. I have been on four elk hunts in my life and have yet to harvest an elk. This is probably the single biggest struggle of my hunting experience so far and is not a statement I tote around with a lot of pride. Three of the four hunts were to Colorado during the elk archery season. I was introduced to archery elk hunting by some of my best friends and we have come close to success each time without sealing the deal.

The first year we were unable to call in a bull, but got ahead of a herd heading to bed one morning. They weren’t very responsive to calling, but we had picked up on a movement trend from feeding to bedding and were able to cut them off. I had a number of cows pass within bow range, but the herd bull (a beautiful 6 point) passed just out of my ethical shooting range. At the time, it was probably the most majestic animal I had ever laid eyes on in person.

The second year we had four very close encounters. Two were with a herd bull we had nicknamed Chuckles because of a very distinct guttural, almost goofy sounding chuckle that gave him away. Our first encounter with him was when he defensively bugled back to our blind calling at less than 100 yards. The next couple hours he toyed with us as he did the yoyo back and forth while we failed to close the distance. Two of us were able to sneak around the downwind side of him stalking in, but never made it closer than 70 yards. The picture below is a trail camera picture of him at a wallow in the late summer. 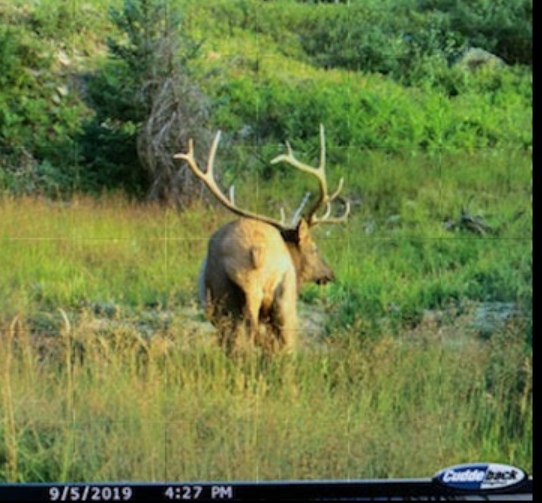 Our second encounter was even more exciting. We located him the night before at dusk and moved in the following morning. We located him in bed with his herd of cows and were able to close the distance to under 100 yards with a good wind. After a calling sequence, we patiently waited until finally a glistening rack glided through the dark timber into sight. I ranged him at 53 yards broadside, but decided against taking the shot. I don’t like shots past 45 yards at live animals, and there were some branches in the way that I thought might deflect my arrow. We had multiple other close encounters that trip, but only one of us was able to take a bull. It was a satellite bull that came in while we were in a calling match with Chuckles. A small, young bull – but a bull I would have happily taken myself.

My last trip to Colorado was the toughest. I went farther than I ever have, stayed longer than ever before, and didn’t have a good encounter until the last day of the hunt. The night before, I was awakened around 2am to some noise outside my tent. At first I thought it was a bear, so I reached for my pistol and head lamp. Soon I realized that it was the sound of a herd of elk – which was confirmed by the bull elk chuckling about ten yards from my tent! Man did I have a hard time going back to sleep. What an unbelievable experience.

In the morning I began what you could call a poor attempt at tracking them up the mountain. My tent had been in their pathway to water and I could follow what appeared to be a fresh trail. I crested the 10,000 mark just as the thermals were starting to switch. Before I sat down to make some coffee, I let out a locator bugle. About 300 yards directly above me just over a finger ridge in a dark patch of timber, there it was – a response. The second one of the trip in fact – and this was the last day! The thermals were switching so I hustled to get above him quickly so I could either prepare to either stalk in or perform a raking sequence.

I was about 100 yards from him at about the same elevation, when a herd of cows busted out of the aspens to my right. The bull had responded to my left… That’s when it hit me…. I had accidentally got in between him and his cows. I figured that he would have heard the commotion, so I immediately started raking a tree.

I barely had time to put the branch down when it happened. He was cresting the finger ridge coming right to me and I felt the wind hit me in the side of the neck.  He took off down into the dark timber.

None of my Colorado elk hunts have resulted in any elk meat in my freezer, but we had some amazing encounters and I wouldn’t trade the experiences for anything. The failure has caused me to obsess over increasing my knowledge of these animals and how to hunt them. It has not discouraged me, but instead has motivated me to be better. My day is coming. 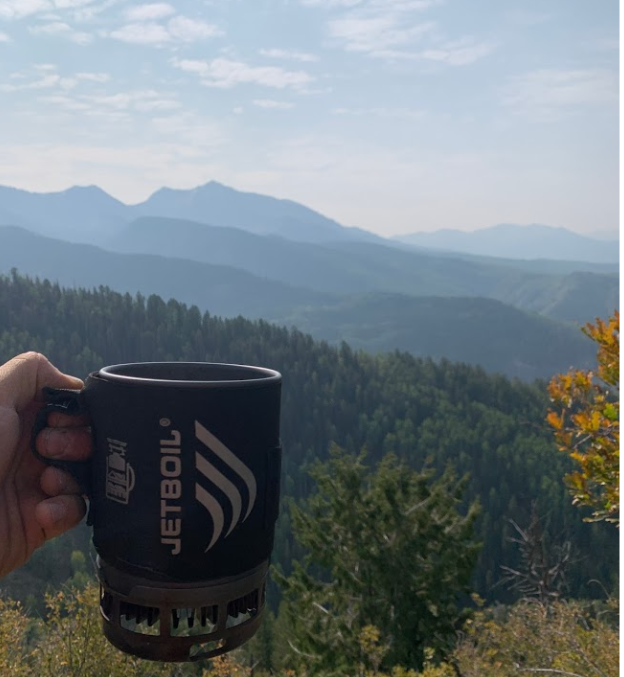