Debunking Shooting Myths: The Truth Behind Why You’ve Been Shooting the Wrong Way Your Whole Life

Debunking Shooting Myths: The Truth Behind Why You’ve Been Shooting the Wrong Way Your Whole Life

Joel Turner, a police officer, firearms instructor, and diehard hunter attended the 2021 Western Hunting Summit outside of Bozeman, Montana. Sharing his revolutionary mental shooting instruction in the form of both classroom teaching sessions and in-the-field training, attendees of the summit agree that it was worth the entire price of admission alone. I knew about Joel Turner and his shot IQ program before the 2021 Western Hunting Summit. What I didn’t know was how radically he would change the way that I shoot both archery and firearms. After listening to his lectures and spending some time shooting with Joel I was sold…completely… and was willing to start from scratch. This meant relearning everything I thought I’d already known and checking my ego at the door. I realized that I have been shooting wrong for 15 years – and you might be too.

This article cannot do justice to the quality of the courses and training Joel Turner offers in his shot IQ programs. The content below was taken directly from Joel’s lectures and teaching sessions at the Western Hunting Summit. It is simply an introduction to some of the concepts that he teaches around the science behind shooting, your own physiology as it relates to shooting, the mechanics of shooting, and developing a shot process.

Now I know what you’re thinking: “I’m a pretty good shot already so why would this apply to me?”

Do you think you know what you’re doing because you say things like “squeeze the trigger,” “aim small/miss small,” “let it surprise you…”

Just for some context, I considered myself a pretty decent shot with both a bow and rifle prior to meeting Joel. If you are an open minded individual, read on. If not, I’d recommend a reality check and deciding whether you want to “keep practicing your own failure “(a common Joel Turner saying).

When someone wants to improve their archery game, they mainly focus on things like upgrading their equipment or the mechanics of their shot. Most people rarely think about the psychology behind common problems like “target panic” and being “locked off target.” Some of these common problems are a lot more complex than you may realize and aren’t going to be solved by getting a new set of arrows, sight, or release. In order to change the way you shoot, you have to change your entire mindset and be willing to take a few steps back in order to move forward.

If you practice Joel’s principles, it is likely you will temporarily shoot less accurately in the short term. However in the long term, you will be able to achieve much higher performance levels and surpass your former ceilings. You will have a process that will eliminate target panic which will make you a more effective, lethal, and ethical hunter when executing a shot on an animal. If you consider yourself an ethical hunter and take price in making clean shots, this ALONE is worth enrolling in Joel’s Shot IQ program.

Lesson 1: Relaxation Cannot be Part of your System

You can tell yourself as many times as you want to “relax” when a bull elk is screaming in your face at ten yards on the last day of a long elk hunt. Or when you have only a few seconds to pull the trigger on a mature bighorn ram that took you 20 years to draw a tag for. Or when you’re in a self-defense combat situation. The fact of the matter is it’s just not going to happen in real life. The ONLY thing you can rely on in high stress situations when you have to execute a shot is your process. Either you have a process that is going to protect you from things like target panic, or you don’t. Muscle memory is not enough. You need a rock solid process that you go through on every single shot. This includes practicing in the yard.

Lesson 2: Absolute Control of Every Shot

This seems obvious, but don’t gloss over this because it may be the single most important part of the process. Without this, nothing else matters. You can’t practice your shot process sometimes. You can’t try better the next time. You can’t fling arrow after arrow in the yard feeling good about yourself, and then tell yourself that you’ll do it when the time comes to kill a bull. Every single shot is a decision. You have to DECIDE that you are going to shoot under control NO MATTER WHAT. Once you have mentally subscribed to this frame of mind, there is no looking back. I don’t care if you miss the target at 20 yards because you followed the program to a tee; write it off to progress and do it again. I promise there will be some delayed gratification. 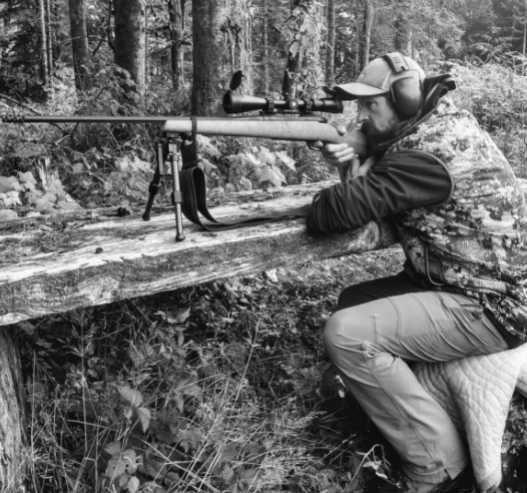 It is physically impossible to hit what you are aiming at.

Yes, I stated that correctly. You might think that you can. Your body might adapt to your weapon and make it look like you do. But your body will not allow impact to occur as a surprise. Every weapon we shoot requires a transfer of energy. Whether it’s in the form of a recoil from a rifle, the movement of the cams on your bow, or the jump of a pistol held at arm’s length – your body will react to protect itself or not whether you think it will or not. This is why people tell themselves not to flinch before pulling the trigger on a rifle. The truth is that you are going to be a less reliable/accurate shot and more susceptible to fold under pressure when shooting with an open loop system. This kind of shooting requires physical aiming (holding the crosshair on the target and pulling the trigger when you think it’s in the right place). This is timing the shot and telling yourself NOW when you want to send it. Shooting a shotgun at a clay pigeon requires this kind of system – but there’s a better way to shoot archery and rifle. Open loop mental systems are NOT for archery or rifle shooting and the fact of the matter is that it is how most people learn to shoot.

Utilizing a closed loop control system takes “aiming” out of the equation. This will not make sense at first, but Joel’s course will give you a thorough understanding. It is a slower motor system and can improve your accuracy and consistently in ways that you may have to see in order to believe. I watched a new student hit a metal plate at 225 yards off-hand with a rifle right after learning this from Joel. Take my word for it – there’s something there.

Lesson 4: Visual Proprioception and Why You Are No Longer Allowed to Aim

Understanding visual proprioception is how you make the jump from an “open loop” system to a “closed loop” system. The next part of my shooting process is getting the aiming over with – and moving on in my shot process. My aim consists of getting my pin (or crosshair) on the general target and then saying the words “Here I go” to begin the next step.

“Watch it to keep it.” If you hold a pen out in front of you and try to hold it on a target, watch as it bounces all over the place. Now take that same pen, but instead of watching the pen, watch the spot that you are trying to hit. Your brain will automatically take the pen and bring it back to that location. This is the basis behind visual proprioception. As Joel says, “Your brain is much better at aiming than you are.”

This was the biggest mechanical change that Joel’s process required me to undertake. Punching the trigger is something I’ve gotten pretty good at in the past 15 years, but I had to throw that out the window.

Let me start by saying that it does not necessarily matter what release you shoot. Yes, some are more conducive to facilitating proper execution of your shot process than others, but that is not the point. You can use your cheap, old release that you bought at Cabelas ten years ago and it will still work just fine for this part.

The final part of the shot process is pulling through the shot. As mentioned in the previous lesson, get the aim over with. Once you are on target, you are now staring at the desired point of impact. At this point, you are out of the aiming room but your brain is still trying to drag you back in there. To keep yourself in the process, you must literally tell yourself “pull, pull, pull.” It doesn’t have to literally be those words because you could say a variety of things, but the point is still the same. You must keep your brain from overriding all the hard work you’ve put into this point by telling you NOW when your pin hovers perfectly right over the spot you’re trying to hit. You must accept the fact that your arrow or bullet is going to go where it’s going to go. You must have faith in the system and fallback on visual proprioception as your means of getting there.  “Watch it to keep it” (staring at the point of impact) and “pull….pull….pull…PULL…(shot breaks).”  If it was truly a surprise that the shot went off, you know you are where you want to be.

I hope this article provided some valuable insight for you from Joel Turner’s Shot IQ revolutionary mental shooting training.  I cannot appropriately articulate the value in this program and the benefits it can provide to those dedicated to continuously improving as hunters and marksmen. Sign up for Joel Turner’s courses at www.shotiq.com. Take your game to the next level and have confidence that the next time you need to make a high pressure shot on a big game animal, you will be ready.